AKA things that I have been up to.

Preparing for the holiday cookie siege.  I made chocolate chips, and gingersnaps, and following Sally’s Baking Addiction recommendation, froze most of them in little raw balls of dough ready to be baked.  I always forget how much I love doing that.  You can freeze cookies for later (as long as the fat content is high and you wrap them well), but nothing really beats yanking out a half dozen cookies and having them bake up fresh whenever you want a treat.  I really always mean to do this year ’round and forget.

Someday I will treat puff pastry with the respect it deserves.  But this was not that week.  My roommate cooked up a bunch of local apples with cinnamon and butter and cloves and I bunged a bunch of them into the world’s most haphazard puff pastry wrapping.  They kind of looked like softballs caught mid-explosion, but tasted delicious.  And while I was at it, I used up the nutella to make puff pastry pockets.  I would have used lemon curd, but tragically, it had gone bad.

And reading.  I read a lot but every so often I lose it and go on reading binges.  Usually when I find a new-to-me author who has not only an enjoyable book, but an entire backlisk.  So Clara Coulson.  Yeah.  Her books are urban fantasy fun, and I devoured pretty much all of them between the 9th and the 15th. 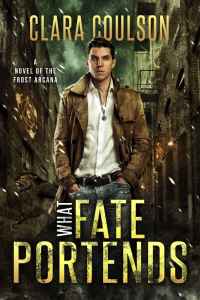 That’s three of the Frost Arcana, five of the City of Crows, and one stand-alone Lark Nation novel.  Just a heck of a lot of fun, though I’d say the Frost Arcana are probably the best entry points.  Cal Kinsey in the City of Crows takes a little getting used to.  If he were a heroine, they’d be lining up to call him a Mary Sue.  Mostly Clara Coulson scratches the same itch that Mercedes Lackey used to.  I can’t wait for more of her books!  If you like adventure based urban fantasy with a surprising amount of super-violent action and great fantasy elements, this series might be for you!  Seriously.  After a celtic fantasy binge that lasted through most of high school, I was kind of burned out on the seelie/unseelie/sidhe/tuatha de danaan mythos.  These books make it all feel fresh again.

Things that I have not been up to:

Writing.  Ffs.  I’m about six thousand words into Book 2 of the fantasy series and sort of stopped working on it.  There are reasons (decent ones), but primarily it comes down to lack of organization.  Life gets busier and busier in the fall and I need to take steps to make it easy to sneak a few hundred words here and there.  It’s easy to get hooked into the crutch of the perfectly set up desk with all your note files and scrivener and the white boards full of maps and the walls full of setting pictures and character images, but when you do, you find yourself thinking oh, wish I could work, but so-sad, I’m out of the office, and not near my desk.  So, I’m trying something sensible and slightly new.  Setting up the next scene and tossing those few paragraphs into google docs so I can access it while at the day job, or out and about.  I can read the plan on the phone and write on paper, or I can read it on a desktop and write directly into g docs.  Failing everything else, at least I can keep thinking about where I want to go in the scene!

And a snippet of what I was last working on.

Genee’s feet turned her toward the side stairs and the guest quarters, not to seek her own rest, no. She might not know where Cavenner and her boys had bedded down, or even where Calyx Favager had slunk off to. But the girl…
Genee had made sure she knew exactly where to find her.
Sianan Maccuin jerked to attention when Genee melted out of the stairwell’s shadows and Genee made another mental note: More light. GreenStone Hall was as dark as a tomb.
“Commander,” she said, but quietly. “Do you need…?”
“She hasn’t come out?”
“Been quiet as a mouse,” Sianan said, “Did she really….?”
Genee waited. Sianan had a sneaky habit of talking in questions, letting people fill in the gaps. She learned more than she should that way. But she wasn’t supposed to apply that to her commander.
Sianan shrugged, “Sorry, Commander. Just… it’s such big magic, and it shook all the walls…. Hard to believe such a small girl could do so much damage.”
“She’s a Favager,” Genee said. “They’re nothing but damage waiting to be unleashed”